Returning to the same places is one of our main strategies for deepening understanding of who and what lives in the grassy woodlands and for building convivial relations with the local wildlife. By returning to familiar places and wildlife habitats over time, we are also hoping that the children will come to notice the way things change, as well as what is new or unexpected.
As we re-visited some of the sites from our first walk, it soon became clear that the  children are keen to reconnect with the familiar.But they are also compelled to look closer, to begin to differentiate and to start to think differently about what is happening.

At our first stop, ‘Ngaraka: Shrine for the lost Koori’, the kangaroo bones immediately recaptured and held the children’s attention. Instead of tentatively inspecting the bones and wondering about their origins and volume, as they had on the first visit, this time they got straight into closely examining them. They focussed upon the different types of bones, identifying them with confidence as they picked them up: ‘this is a leg’, ‘this is a nose’ or ‘an arm’. Finding a piece of jawbone with several teeth intact was of particular interest.

To re-invoke the haunting sounds of the first visit, a couple of children started rhythmically beating the metal shrine with the bones. They were cautioned by another child not to beat so hard. She seemed to be attuned to the fragility of the fragmenting bones and concerned that they might be damaged.

The children’s growing confidence with the familiar sights and sounds of revisited places was also apparent in the new initiatives they took to find out ‘who lives here’. On the first visit, we were intent on drawing the children’s attention to the presence of wildlife. On this visit, we noticed that the children themselves were calling out ‘it’s a clue!’ when they spotted a hole in the ground or a scattering of poo, and were inviting each other over to inspect the signs and work out what animals might have left them. 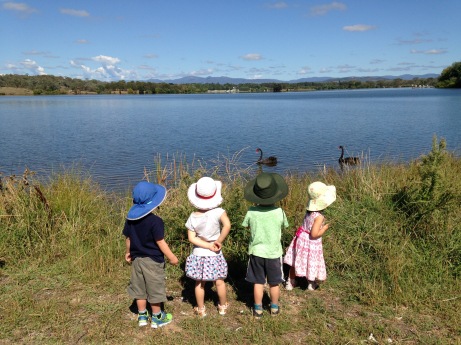 We ventured a bit further down to the lakeside. The children spotted a pair of black swans swimming nearby. They watched intently as the swans changed direction and swam directly towards us. It appeared that the swans were as interested in us as we were in them. As they glided over to the water’s edge right in front of us, the children’s curiosity intensified.

A small group called out welcoming ‘hellos’ and encouraged the swans to come out of the water: ‘come out swannies, no need to be afraid’, ‘come and eat, we have plenty of grass for you’.  Negotiating the proximity zones of interspecies encounters is always a sensitive move, akin to what Donna Haraway calls the ‘dance of relating’. From the human side, there’s a tension between the thrill of coming so close to a wild animal in its own territory and the disconcerting question of safety – especially on the first encounter when it’s still so uncertain.
When the swans eventually waded out of the water and approached us, the welcoming

children also moved forward to greet them. One child exclaimed: ‘They’re coming close. I love them coming closer’.  Other less confident children drew back. Up close, the vibrant red colour of the swans’ beaks and their extraordinary necks drew comment. One child noted that the shining red beaks looked like lollies. Other children commented on the differential scales of bodies, comparing the swans’ long necks to our short ones, and to the even longer necks of giraffes. One or two children interacted directly with the swans, asking them questions like: ‘have you got a baby?‘ This was a special meeting. There was an intimacy to it. The children seemed to be moved by  this mutually curious encounter with intelligent wildlife so radically different to themselves. 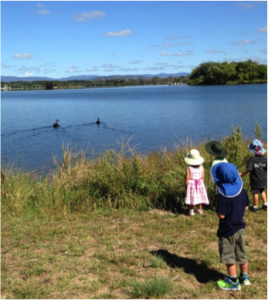 After noting with a tinge of disappointment ‘Oh – they’re going now‘, they called out a chorus of ‘goodbyes’ until next time.

Maybe knowing that we will return to the familiar and encounter wildlife anew is already part of the way children experience this place.