We started our walk by taking some time to lie on the grass – to simply be there and attune our senses to where we are and what is going on around us.  The children noted the grass was ‘prickly’, ‘furry’ and ‘soft’. While some children lay still, others invariably rolled around or got up and moved around to try lying and sitting positions in various spots close by.

From this perspective, some of the children’s attention was drawn to a pile of pine cones; the very same type they had looked at earlier in the Centre when they had broken one open to see what was inside. 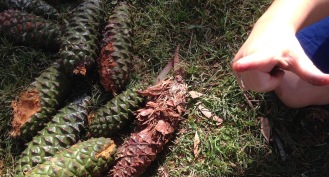 The old brown cones were distinctly ‘spiky’. Yet, it was the green ones – which looked smooth and inviting – that surprised us when we picked them up. As one child commented ‘it’s very sticky’, with others chiming in ‘sticky, sticky’!

The tacky texture of the pine sap on our fingers acted as a reminder of this sticky encounter for some time after.

In all of our walks the children have interacted with the sticks that are scattered around. At various times they have all picked up sticks to carry with them, whether it be big, small, forked, leafy, rough or smooth.  Sometimes they drag the sticks behind them, use them to poke at holes in the ground or prise the bark off trees.  Some also use them playfully, tickling each other with the soft fronds of a fallen casuarina twig.

Today, the children spent much time ‘fishing’ with an assortment of sticks and pieces of reed.  Bending over the water’s edge, the children called ‘come on fishy’ and ‘come on, you can make it’. 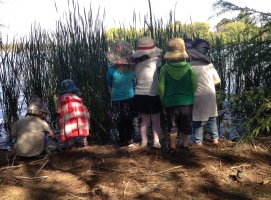 At various ants’ nests, the children stopped to observe the flurry of activity.  On previous walks, we had talked to the children about not stomping on the nests or poking things down in the holes so the ants wouldn’t get cross or upset.  The children seemed to remember this, standing mostly at the edges and noticing how the ants would go about their business (and even crawl over the children’s shoes) without causing any harm.

This time, they adopted a new method for enticing the ants to come a little closer. Picking up a nearby stick, the children laid it gently on the nest, entreating the ants to crawl on to it and towards their hands. Occasionally, if the ants were not quite active enough for their satisfaction, the children would bang the nest with the stick to get a reaction, before reminding each other that it might be best to keep the stick still.

Reflecting on the relations between children, sticks and wildlife, it seems that sticks are more than simply random inert tools. Strategically positioned, they might entice ants to move in a direct line towards children. Straddling above- and under- water worlds, they might attract unseen fish and, at the moment of touch, connect them back to children. The sticks materialise seamless interconnection – lining up bodies and providing a tangible conduit between human and nonhuman wildlife. It’s clear that sticks allow children to exceed the physical limits of their own bodies – to reach out and touch inaccessible wildlife. But perhaps they also forge more affective connections for the children, akin to what Sara Ahmed calls ‘sticky attachments’. These are the kind of emotional relations that bind subjects together across difference. In this affective sense, the sticks could be functioning as ‘sticky’ lines of attachment, adhering or bonding the children with the hard-to-reach creatures of this place.

Some unusual finds towards the end of our walk had the children puzzling.

Along the bank was a series of wild (human) creations including combinations of feather and pine cones, grass woven into the forks of trees, a canoe-shaped formation of sticks and a tangled mass of netting hung high in the branches overhead.

After following this little trail of mysterious clues, one child observed ‘I think someone’s been making lots of stuff here!’

The children dragged some larger sticks back to the Centre to add to their own creative project – a fence interwoven with pieces of wood collected over time.

Perhaps this creation is another way of articulating the sticky entanglements of grassy woodlands wildlife and their own lives in this place?