Walking on this first cold wet day did little to dampen the children’s enthusiasm and energy. If anything, they were enlivened in new ways as they tested out the feel of raindrops, of slippery wet objects, and drew in the new smells arising from the damp earth.

A number of the children found different ways to feel the rainwater. One child reached out and ran her fingers along a cold steel rail to collect several drops before bringing them to her mouth to taste. Another turned his head to the sky, closed his eyes and poked out his tongue. He then wandered around for sometime, collecting as many drops as he could in this way. When asked by the adults to describe what the rain tastes like – he seemed bemused. Perhaps he was intent on catching rain on his tongue for other reasons – to feel the coolness of the drops, to sense the weight or force of falling water ….? Not all sensory experiences are easy to articulate.

However, it was clear that the children 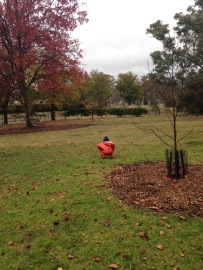 were affected in new ways on this wet walk.Some children knelt down to investigate the new sponginess of the grass. They commented that the earth smelt wet. Screwing up her nose, one child declared that the rain made everything smell ‘disgusting’, like ‘yucky wet poo’.

A group ran to find shelter under the glossy dense canopy of a kurrajong tree where the ground was still dry.

The children noticed some of the differences that wet weather made to familiar sites.

At the Koori Shrine, the kangaroo bones had changed colour.  They had taken on a distinctively green hue, revealing the ways in which rain activates the mossy spores that are otherwise barely visible on their sun-bleached calcium surface.

A couple of children picked up the green bones and continued their ritualistic scraping on the frame of the sculpture. This time, instead of producing a bell-like sound, the friction of wet bones on metal was clearly cause fragments of bone to disintegrate and stick to the rusty surface.

The nearby sculptures that the children have named the ‘donuts’ are always a draw card. Their smooth low surfaces are perfect for the children to drape their bodies on and to practise balanced walking. In fine weather, the children have felt how the smooth masonry surface absorbs and holds the heat of the sun. In the rain they found that the surfaces were not only cold, but also very slippery. They had to attend more carefully to securely navigate their footing.

Because this was our first wet walk, it was also the first time we had encountered puddles.

The water that had pooled on the bike path proved to be a predictable magnet – especially to those children who had worn their gumboots. With intent focus, the children repeatedly jumped in the puddles. Their efforts had multiple effects. Their boots made loud splashing sounds which they tried to amplify by jumping more and more heavily. The impact of their jumping bodies caused the water to shoot up into the air, and after the event, to ripple out in concentric circles. Testing the limits of their force, the water finally (and inevitably) splashed into their boots and wet their socks. All part of the children’s wet weather worlding experience.

As well as their own bodily encounters with the wet weather world, the children came across other species that were differently affected by the rainy weather.

For the first time, they found a line of mushrooms that had sprung up close the lake foreshore. Aware that mushrooms can be poisonous, and they should neither eat nor even touch the ones they find, they limited their curiosities to looking from a respectful distance.

Another unexpected find was a dead rabbit. It was a sad but also rare opportunity to see

a rabbit up close. Without any obvious marks on its body, the children wondered how the rabbit might have died – ‘maybe he ran too fast?’ one speculated. One child was particularly concerned about the apparent vulnerability of this dead rabbit, so clearly exposed to the cold wet elements. ‘He might get all wet’, she said as she and the others looked down at the still small body.