Snow clouds were gathering over the Brindabella Mountains, and when the westerly wind gusts blew across from them, we were pleased to be so rugged up. One child noted the force on her body when she commented ‘I’m trying to walk this way but the wind is pushing me back that way’. It was definitely not conducive weather for animals to be on the move – there were very few out and about. We didn’t even see any rabbits run out of the grass. We asked the children to think about where the animals go when it’s so cold. 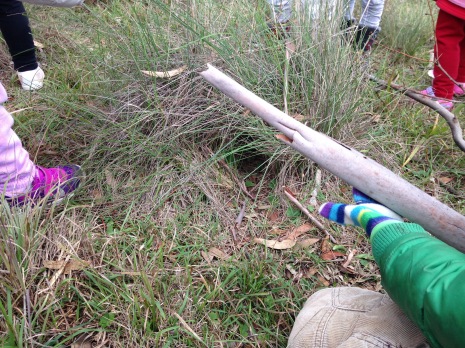 They found the first possible answer to this question in the tussocky grasses  – a round hollowed out form that they hadn’t noticed before. It was not quite a burrow – more of an above-ground hole. It looked like the kind of place where an animal might temporarily stop for shelter, rather than permanently live. We weren’t sure if the rabbits made the hollow shelter, or some other kind of animal. ‘Could be a rat?’ one the children suggested, but the rabbits had definitely used it. 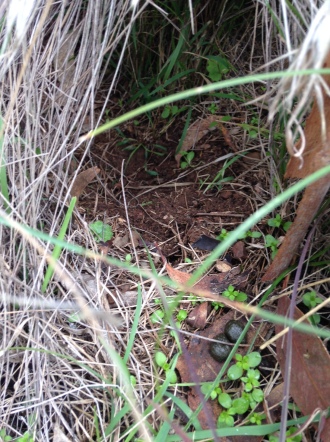 We knew this as they’d left their tell-tale scratchings and droppings at the front door. Once the children’s eyes were attuned to the shape of this grass hollow shelter, they started to notice that there were quite a lot of them. ‘Here’s another’ someone would call out, inviting others to run over and inspect. 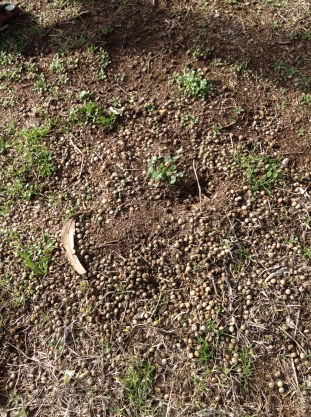 In stark contrast to the noticeable physical absence of rabbits in the grass, there was (as always) abundant evidence that rabbits still live here – in increasingly large numbers.  Rabbit markings – scratchings, burrows, piles of poo – have become a ubiquitous feature of the landscape, seemingly reshaping it now on a daily basis. The children have become so accustomed to the signs of rabbits everywhere, that they’ve become quite blasé about them. For instance, they’ve taken to regularly chanting ‘Another rabbit toilet’ in ‘ho-hum’ tones, as they walk along.

They were not quite so blasé when they came across yet another dead rabbit, lying next to a burrow. These encounters with dead rabbits have become a regular occurrence, and we’re beginning to really wonder what’s going on. This time, the rabbit’s body had been partially eaten and was starting to decompose. ‘I can see the spine bones’ one child commented – perhaps also recalling the kangaroo spine bone fragments they often identify at the shrine.

The semi-enclosed pathways under the casurina trees beside the lakeshore are always a drawcard, but they exerted a specific kind of pull in this weather. The children quickly ran across the exposed open parklands to get there. Once ‘inside’, they came across a pair of wood ducks and a few purple swamp hens also sheltering in this relatively protected space. 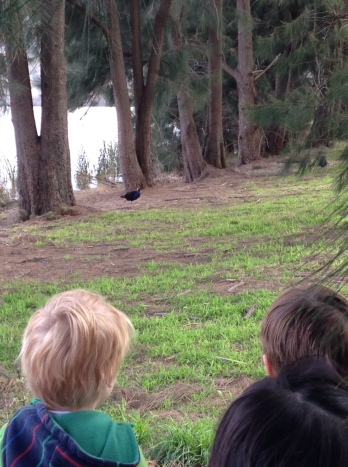 They immediately stopped running, clustered together and started to creep along – trailing the shy swamp hens. ‘Shhh’, ‘shhh’, they kept reminding each other to stay quiet, knowing from past experience that the swamp hens are very easily startled and would fly away if someone made a loud noise.

A couple of children started gathering fallen casurina branches and throwing them into the lake. When queried, they explained that they were ‘making a warm blanket for the fish because they must be cold’.

On our way back to the centre, the children couldn’t resist stopping off at one last favourite spot. This time it was the covered thicket of garden bushes that drew them in. They’d inspected its dark understory many times before, for animal traces. Today it became the children’s own shelter – their ‘home-corner’ cubby.

On this walk, we skirted the edges of alternating sunny blue skies, and looming dark rainclouds. This unstable weather brought with it the interchangeable experiences of brightness, shadow, warmth and cold and a continually shifting and enlivened quality of light.

One child commented that the trees were ‘sparkling’, as the sunlight caught on the multitude of fresh rain drops on the leaves.  Another child compared this to being out in the night, recalling that when he looked up at night time it was all ‘sparkly’ from the stars. 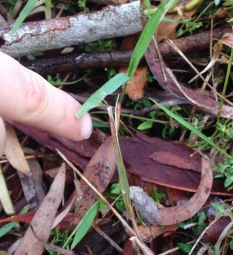 On the damp ground, the saturated vegetation was rich in tones.

The children noticed the deepened colours of the bark, leaves and grass, both in shadow and in sunlight.

The base of a eucalyptus tree was littered with long strips of newly fallen bark.  The children were intent on finding the longest possible piece to play with.  Once located, this length of bark accompanied the children for quite some time. They took it in turns to carry it along with them.

The children seemed to be holding onto the long bark as a thread of connection; one that linked them together as they walked and as well as acting as a moveable thread of attachment to the entities and places they were passing by and through.

One of the most notable things they came across while walking with the bark was (yet another) dead rabbit. This one lay exposed on its side on a grassy hillside. Once again, they started to guess about what had befallen it, with thoughts ranging from ‘maybe a fox got it’ to the more frivolous suggestion that ‘maybe the Easter Bunny hopped on it‘?  The children stood gazing at the rabbit for quite some time. It was only at the prompting of the adults that they moved on.

The lake water was higher and rougher after an extended period of rain. The children thought it was ‘a bit like a flood, and noted that the water ‘is nearly up to the trunks’ and ‘its got bigger waves.’ 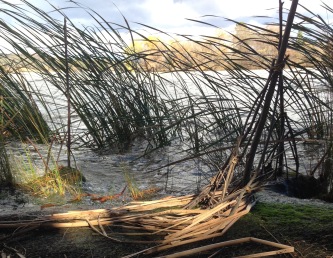 When one of the adults mentioned that the water looked browner than usual, a child responded with the unexpected conclusion: ‘there must be a rabbit in the water’.  Although now standing at the lakeside, he seemed to be drawing stronger threads of connection back to the earlier encounters with dead rabbits than to the particular qualities of flood-waters.

On this cool, windy day, the children scuffled along through the autumn leaves.

Some ran on ahead before playfully falling to the soft grass aided by the gentle force of the wind. One child took advantage of the large fallen leaves, setting them to sail on the lake as little ‘rafts’. Another gathered a bundle together to take along with her. 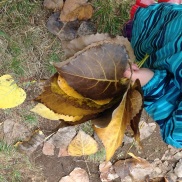 This autumn day also seemed to invite a multitude of birds to the lakeside surrounds. Some ducks came to visit the children while they were ‘fishing’.

In the distance, a flock of Cormorants perched on a rocky outcrop.

The children were captivated by the stillness of the birds, whispering quietly ‘they are standing like a statue’.

When a helicopter flew overhead, the unexpected noise disturbed the birds setting them in flight.

Despite this flurry of activity, it was the memory of the birds as motionless on the rock that seemed foremost in the children’s minds. A few commented for some time afterwards ‘I think they were statues, because they were not moving’.

It is easy to get caught up in thinking that children need action, motion and excitement to draw and keep their attention. Yet, on this windy walk, as on others, it was just as often the small things that were still or barely moving that captured their curiosity. 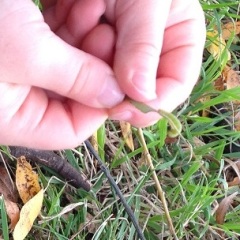 For instance, as a group of his friends ran through the leaves, one child spotted a small caterpillar on a leaf and gently lifted it out of the way to a safer place.What was it about the unassuming presence of this small creature, in midst of such activity and commotion, that first drew his attention?

Noticing these child-bird and child-caterpillar interactions reminds us that the intimacies of stillness can be as compelling as the excitement of movement on a blustery day.