On this walk, we skirted the edges of alternating sunny blue skies, and looming dark rainclouds. This unstable weather brought with it the interchangeable experiences of brightness, shadow, warmth and cold and a continually shifting and enlivened quality of light.

One child commented that the trees were ‘sparkling’, as the sunlight caught on the multitude of fresh rain drops on the leaves.  Another child compared this to being out in the night, recalling that when he looked up at night time it was all ‘sparkly’ from the stars. 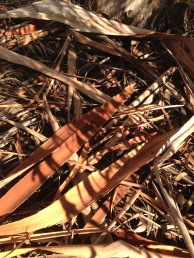 On the damp ground, the saturated vegetation was rich in tones.

The children noticed the deepened colours of the bark, leaves and grass, both in shadow and in sunlight.

The base of a eucalyptus tree was littered with long strips of newly fallen bark.  The children were intent on finding the longest possible piece to play with.  Once located, this length of bark accompanied the children for quite some time. They took it in turns to carry it along with them.

The children seemed to be holding onto the long bark as a thread of connection; one that linked them together as they walked and as well as acting as a moveable thread of attachment to the entities and places they were passing by and through.

One of the most notable things they came across while walking with the bark was (yet another) dead rabbit. This one lay exposed on its side on a grassy hillside. Once again, they started to guess about what had befallen it, with thoughts ranging from ‘maybe a fox got it’ to the more frivolous suggestion that ‘maybe the Easter Bunny hopped on it‘?  The children stood gazing at the rabbit for quite some time. It was only at the prompting of the adults that they moved on.

The lake water was higher and rougher after an extended period of rain. The children thought it was ‘a bit like a flood, and noted that the water ‘is nearly up to the trunks’ and ‘its got bigger waves.’

When one of the adults mentioned that the water looked browner than usual, a child responded with the unexpected conclusion: ‘there must be a rabbit in the water’.  Although now standing at the lakeside, he seemed to be drawing stronger threads of connection back to the earlier encounters with dead rabbits than to the particular qualities of flood-waters.