They’re still mulling over all the rabbit carnage they witnessed on display at the National Museum of Australia – coming to terms with the realisation that full-scale wars against rabbits are part of the settler Australian story. They told us that they’ve been thinking about how ‘the farmers snapped the rabbits’, about how ‘the rabbits were running around everywhere’ and ‘they were scared’, about how there were ‘so many dead rabbits’, ‘hundreds and thousands and millions of rabbits’. ‘It’s not fair what they did to those rabbits’. One child reflected that rabbits shouldn’t eat the poisoned carrots that the farmers put out for them, because ‘the carrots are just a trick to kill them’. It was clear where their sympathies still lie.

They also admitted that they felt scared watching the rabbits being killed on the film. They wanted reassurance this kind of rabbit killing only happened ‘in the olden days’. They still seemed a little unsure about why so many rabbits needed to be killed, but the idea that ‘they eat too much grass’, ‘there’s none left for the people to look at’, was offered as one possible explanation. This led to a discussion about how some other animals might starve to death if there are too many rabbits and they eat all the grass. They remembered how in the film there was no grass left, ‘there was just dirt everywhere’. They pondered on how everything has to eat something else to stay alive: ‘bunnies eat grass’, ‘foxes eat bunnies’ … ‘but no one eats us’ added one child quickly.

The need for reassurance extended to a desire to see some live bunnies ‘not just dead ones’ on this walk. So we decided that we would go on a ‘live bunny’ hunt – not to harm them, but just to look at them. We agreed that we would need to be quiet so as not to scare them. 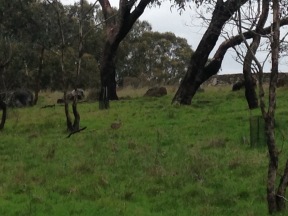 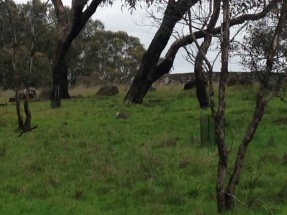 Fortunately we spotted quite a few, some babies amongst them, grazing on the hill. With much ‘shhh-ing’, the children set off in pursuit. One child declared that she was being a rabbit, and that this would help her to get close. They were surprising good at staying quiet, but they weren’t so good at sneaking up. 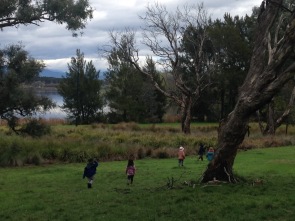 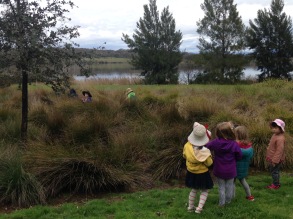 As the children barged towards them, the rabbits fled down the hill and straight into a patch of lomandra grasses. The children wearing gumboots followed them inside, but the rabbits were long gone down their burrows. 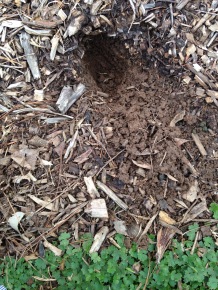 They found plenty of fresh rabbit holes however, as well as other ‘clues’ like rabbit fur and rabbit scratchings. 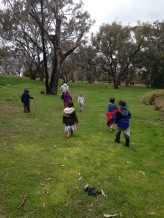 Their second attempt at live rabbit hunting was a more measured one. The children slowly and stealthily snuck up the hill this time, heading towards a couple of rabbits they could make out behind some bushes. This time, they managed to get quite a bit closer before the rabbits turned and bobbed away.

Just seeing some healthy live bunnies hopping away was reassuring.

Our plan for this week was to follow up on the children’s different kinds of rabbit interactions and engagements with a visit to the Rabbits in Australia exhibit at the National Museum of Australia (NMA). It’s an easy walk from the Centre – or so we thought. As we set off, we were buffeted by cold, wet, westerly winds. There was fresh snow on the mountains overnight, and we could feel it in the wind gusts. So much for the spring weather we’ve been enjoying recently. If felt like winter had returned with vengeance. 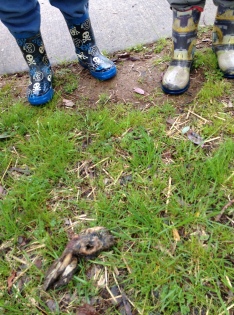 Heads down and braced against the wind, we’d only made it as far as the first road crossing when we stumbled across a sodden rabbit head. Even though the children have become quite accustomed to finding dead rabbits, it was a bizarre find, and seemed like an eerie sign. We continued on, but the discovery of the severed rabbit head prompted the children to break out into a nervous rhythmic chant: ‘dead bunny head, dead bunny head’.

It was a relief to get to the museum, out of the elements and into the warmth of the foyer. We made our way down to the ‘People and Environment’ gallery, which houses the ‘Rabbits in Australia’ exhibit.

In line with the theme of this particular gallery, it explores the diversity of relationships that different Australians have had with European wild rabbits, since they were introduced by setters in the mid 19th century. These include some Indigenous people’s incorporation of wild rabbits within their narratives and cultural artefacts, rural settlers’ reliance on rabbits as a free source of food during the depression years, and the sale of rabbit pelts for a livelihood. 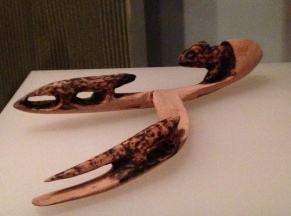 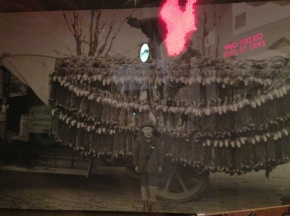 Predominantly though, the exhibit features the wide range of tactics used by farmers and government authorities to try and halt the spread of rabbits and to reduce their numbers. This information is conveyed through film footage of fumigating and ripping burrows, accounts of the release of the rabbit calisivirus, and displayed artefacts like sections of the Western Australian rabbit-proof fence, old rusty traps, and a .22 rifle. 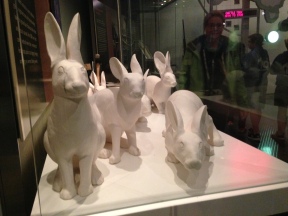 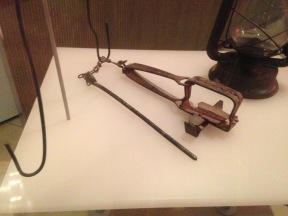 The children were clearly taken aback by all this emphasis on killing rabbits, but their reactions were also mixed. They were openly curious about the technologies of rabbit hunting. Many kept asking how the rabbit traps worked, and didn’t seem that impressed with the explanation. They struggled to understand why so many rabbits needed to be killed, and how they were harming the environment. 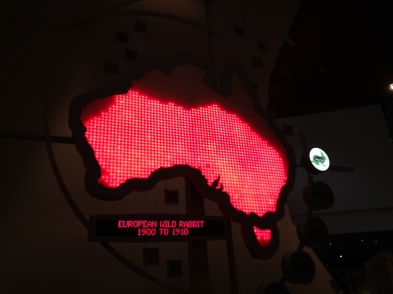 When they watched the large neon map of Australia up on the wall light up in red to show the rapid spread of rabbits across the continent, it did seem to help them apprehend the scale of the rabbit problem, with comments like: ‘There’s a lot of rabbits in Australia, yeah’ and ‘Woah. Rabbits all along Australia’.

However, most of all they expressed a great sympathy for the rabbits. As they clustered around a small screen to watch a documentary ominously entitled ‘Menace of the Rabbit’, they were aghast at the sight of so many rabbits being slaughtered and skinned. ‘Poor bunnies’ they kept repeating, and ‘that’s so horrible’; ‘that’s not fair for the rabbits’.

Back in the big open space of the main foyer they seemed to have recovered from the shock of these images. Setting aside the heaviness of the newly dawning realisation about the significance of invasive rabbit populations and the cruelty of human retaliation, they quickly fell back into the comfort of their customary rabbit play. 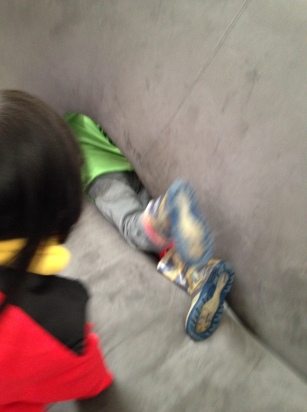 Laughing and scrambling across a long lounge with holes in the back at each end, they called out gleefully: ‘we’re rabbits and we’re going down into the rabbit hole’.

Nearly everyone eventually took off their jackets on this walk. It’s starting to warm up – enough for a number of children to swap their beanies for shade hats – and for underground life to be stirring and slowly emerging on the surface. We spotted our first baby rabbit venturing out of its burrow, and lots of purple spring flowers. Snake season looms, and we’ve told the children that it’s no longer safe to run into the long tussock grass to play rabbits. 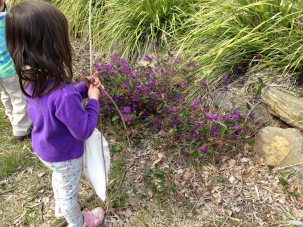 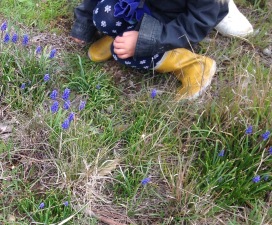 The lake is full to the brim after so much winter rain. There is one particular lakeside spot under the casurina trees to which the children return time and again. On this occasion, they really settled in – presumably because the warmer weather makes it more conducive to hang around at the water’s edge. 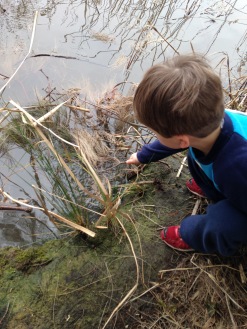 A group of children started laying casurina branches in the water as ‘homes for the fish’. This gradually shifting into ‘We’re making beds for the fish, so that they’ll come and we can catch them’. After some uncertain conversation about how they would pick the fish up, once lured into these homes or beds, a few children wandered off to find trusty stick ‘fishing rods’. Some also went looking for ‘bait’.

The fishing activity was engrossing. There was a lot of serious ‘shh-ing‘ going on, lest the fish be scared away. It seemed like the hope of a ‘catch’ was enough motivation to maintain their focus and attention for quite a while. 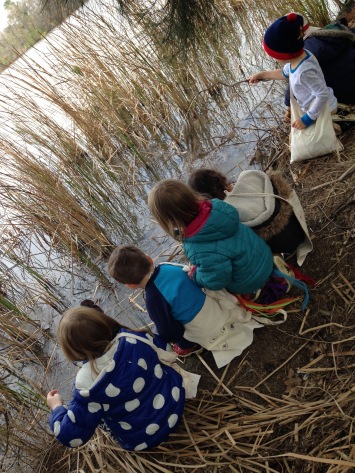 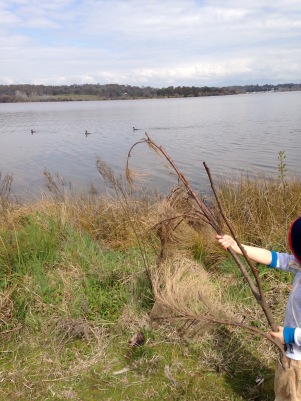 Once abandoned, the children were quick to refocus their attention upon the next group game. The adults were trying to get them to watch 3 cormorants that were diving for fish out on the lake, but the children were more intent on heading up to the rock wall where the rabbits live. 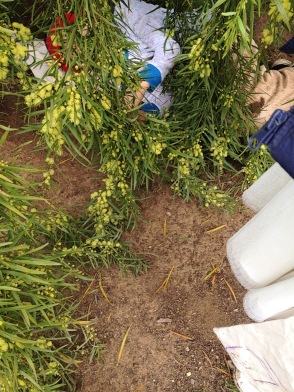 As soon as they reached the top of the wall, they dived straight under the weeping acacia tree that has been their favourite ‘rabbit’ hideout on the last few walks. As if injected by a new surge of energy on this relatively warm day, the gang of ‘rabbits’ took on a whole new aggressive persona. No longer huddling under the tree to shelter from the cold winds and avoid being spotted, they loudly declared themselves to be ‘carnivore rabbits’ that ‘like eating people’. 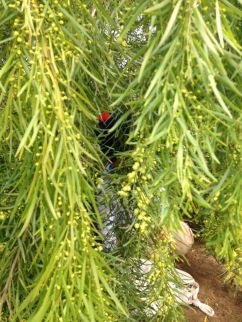 The leafy rabbit hide turned into a mustering point where squadrons of ‘killer rabbits’ plotted and launched their repeated raids – attacking the adults standing around outside.

Once again, the high-spirited ‘rabbits’ had to be coaxed to leave their tree-hide when it was time to return home.