There were no surprises on this walk. Instead, the children retraced their steps, recalling events associated with sites they had visited previously, reminding us that place is a strong repository of memory.

As usual,  the children looked for interestingly-shaped bones at the Ngaraka Shrine and tried to identify them. We had our regular discussion about shrines being places for remembering, and the children noted, as before, that this shrine is the place to remember ‘the kangaroos that have died’ and ‘the Aboriginal people that were here first’. A couple of children set about constructing their own mini-shrine out of bones – a shrine within a shrine.

As we headed off down the hill they searched for the possum tail they had found on the last walk at the ‘big teeth’ sculpture. It was nowhere to be seen, so they abandoned the search and quickly scrambled up the rock wall, pausing briefly, as they usually do, to inspect the rabbit burrows before heading off to the lakeside. 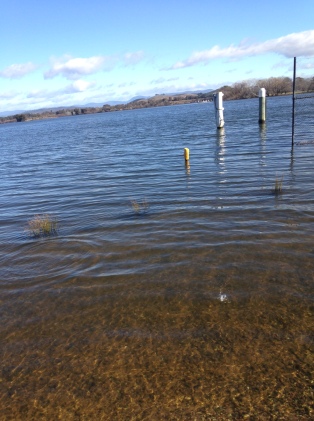 Unlike on previous walks, there were no waterbirds to be seen this time. In their absence, the children engrossed themselves playing with sticks and stones. They used the sticks to splash the water and prod the little pebbles at the water’s edge. They threw the pebbles into the water, trying to propel them out as far out as they could. The concentric rings that spread out from the impact of stones on water became the mark of a successful throw.  The water afforded familiar patterns of response to their stick and stone incursions.

Sifting through the multi-coloured pebbles, the children were keen to find some ‘precious stones’ and ‘jewels’. The potential ruby turned out to be a piece of red plastic, ‘maybe from a bike light?’, and on closer inspection, a look-alike ‘emerald’ was just a worn fragment of a broken green bottle. 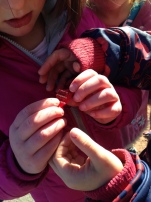 A large shiny object, which looked a bit like a big smooth rock from a distance, turned out to be a plastic bag full of sand. These rogue pieces of waterside trash prompted the children to reflect upon the hazards that plastics pose to water-birds and fish – ‘they can die from eating the plastic’. The conversation was a repeat from previous visits to the lakeside and a reference to knowledge gained in the classroom. The children were clearly grappling with what they might do with this disturbing information. And once again, they faced the dilemma of wanting to protect the wildlife by removing the plastic from the beach, but at the same time remembering that they are not supposed to pick up trash.

One thought on “Sites revisited: Memories and dilemmas”