Despite the overnight rain and a cold day that invited us to rug up in coats and beanies, the children seemed to sense a shift towards warmer weather.  As we ventured out, the children talked to each other about this invisible yet somehow discernible change in the air: ‘It’s like Spring but not Spring yet’.

The presence of a flowering Acacia nearby confirmed this idea. Though with this too came reminders of the bodily discomforts that might lie ahead for some.  ‘That’s a Wattle’ one child explained. ‘My mum’s allergic to pollen’. The vibrant yellow flowers also prompted a reminder of bees and how they would soon be buzzing around to ‘bring the pollen home and make it into honey’.

Rabbits darted off through the grass, and the damp earth was spotted with the scratchy beginnings of many rabbit holes.

All of these small awakenings seemed to be somewhat catching, and the children’s lively movements echoed the seasonal change in the air.  The children all had a definite spring in their step, walking and running at times with heightened energy and anticipation as to what they might find.

And they found many things. A bone that looked scissors, another bone that was like a ring and a pine cone that could be a hat. 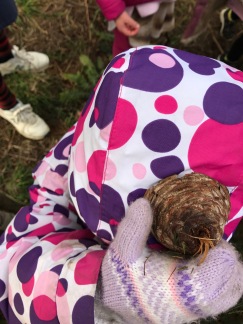 These interactions between the children and the various objects they found were full of playful possibilities. The children seemed to invite their home worlds into this place, and at the same time strengthened their connection to this place as somewhere they also felt  ‘at home’.

A chance meeting with a dog called Lucky also reminded us that the ‘wildlife’ here at times includes more domesticated companion animals.  The children were reluctant to say goodbye when it was time for the friendly dog to continue on its walk.

The children also saw the lively traces of other creatures in various objects. One child picked up a rotting log and noted it was full of ‘holes’ and even some ‘poo’.  As the children pondered on these markings, they shared ideas: Somebody pecked in it. A bird. A woodpecker? 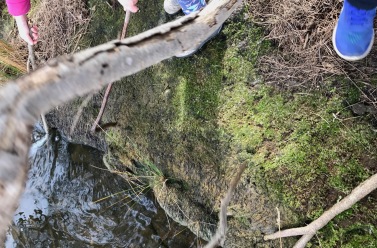 The edges of the lake were slippery from the recent rain, but this didn’t deter the children from their lakeside explorations.

As on previous walks, bits of rubbish were spotted again floating in the water and became the subject of some intrigue

A yellow bottle top caught one girls’ eye, and she called out ‘Golden money!’. Soon others gathered around: ‘Where’s the golden money. There! We need golden money. But how do we catch it?’.  A flurry of splashing sticks soon ensued as the children tried to entreat the bottle top to come within reach. 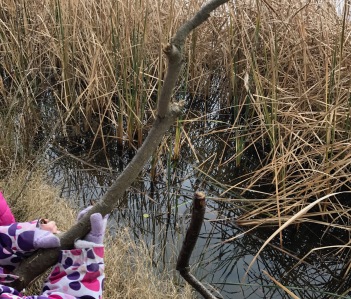 Despite all these efforts, the bottle top gradually moved further away, and children soon gave up on this mission.

More luck ensued with a bottle floating closer to the edge, this time within reach. However, a further surprise was in store, for on closer inspection we could see that the bottle had a message in it!  ‘Pirates for sure’, one child exclaimed. 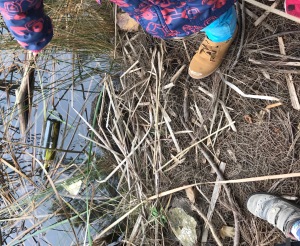 The children retrieved the bottle and tried in vain to open it, each taking turns. ‘Too slippery. Too slippery as well. Too hard. Let me try’. The wet surface of the glass made it impossible to grip, and twisting off the lid was just too hard.

Resigned, the children placed the bottle back at the water’s edge ‘Perhaps we weren’t supposed open it.’  One child remembered wooden planks of the ‘Titanic’ from a previous walk and thought ‘Perhaps it came from the Titanic’. 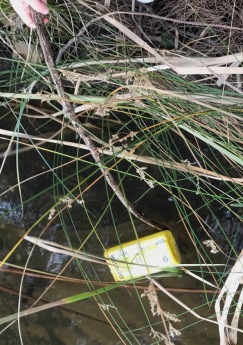 Somewhat ominously another discarded container floating nearby was marked ‘Danger’ and we decided it was time to leave our explorations of the lakeside for the day.

On reflection, it was surprising how even within these small encounters, the children become aware of the complex intermingling flows of water and rubbish, evident for example in their musings on how a piece of rubbish might move from one part of the lake to another, or in their attempts to reach a piece of rubbish only to watch it swirl closer and then move away again.  The children seemed to test and also recognise their own limits in trying to extract rubbish from its watery path. In these interactions we all witnessed some of the human and non-human forces at play in the possible travels and trajectories of discarded human litter.

One thought on “Shifts and flows”