At the start of our walk, we stopped by the magnificent web of a Golden Orb Weaver spider that one of the educators had spotted in the car park earlier in the day. 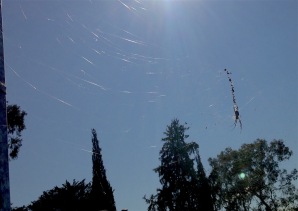 The sun shone directly on to the web bringing out the intricacy of the structure and revealing the insects and leaves trapped in the strands.  This was to be one of many different spider homes we were to see on this walk.

The children were each given a magnifying glass to use.  The first thing they did was to hold the glasses right up to their eye, looking around to take in the new perspective. 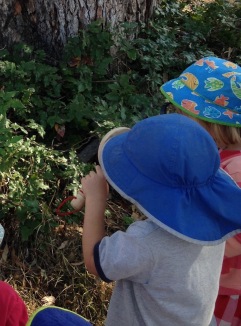 You look like a ‘giant’ they kept exclaiming as they studied each other through the glass lens. They then turned the magnifying glasses to the sky and the tree tops, scanning the spaces over-head and looking far into the distance.

After a while, the children directed their magnifying glasses to the micro-worlds around them.  Some tried to follow the trail of ants scurrying up a tree, only to discover the challenge of watching a moving object through the glass.

Having the magnifying glass seemed to draw the children’s attention to different plant life.

They commented on the various colours of the bark and the texture of moss on the rocks; with one child finding a moss-covered rock that ‘looks like a dinosaur’.

We found spider webs in rock crevices, strewn across the bark of trees and hidden under metal structures. With each new find, the children would call out ‘look what I found’ and the others would rush over in anticipation.

Magnifying glasses are intended to be used as tools to examine close-up the smaller detail of life around us that we might otherwise miss. But their diffractive potential is greater than the intended purpose. On this walk the children experimented more widely with the perspectives the convex glass offered; intermittently using them to alter the perspective of things and creatures that were both near and far, small and large. The shifting optics enabled by the magnifying glasses opened up new ways of seeing and thus experiencing these local surrounds.

One noteworthy new find was an unusual tree.

The children were drawn into folds of the drooping foliage and, once ‘inside’, could not resist climbing and clambering through the lower limbs.

On closer inspection, the entangled trunks and branches were in fact two trees: a tall Eucalypt growing right up through the middle of a Peppercorn tree.

The tree embodies the entanglements of different species that we are thinking through in this project. How might we co-inhabit our already entangled common worlds in ways that are mutually beneficial?

Some children collected small bunches of peppercorns and others noted the smell of the peppercorn leaves on their hands even after we had returned to the Centre; a lingering sensory connection to the places we had been.